China warned of the risk of cryptocurrencies causing the market to burn and evaporate nearly 500 billion USD in total capitalization.

According to the Coindesk , this evening, the Bitcoin price had once dropped below $32,000, but has now recovered to over $35,000. However, in the past 24 hours, the world's largest digital currency has dropped by nearly 18%. 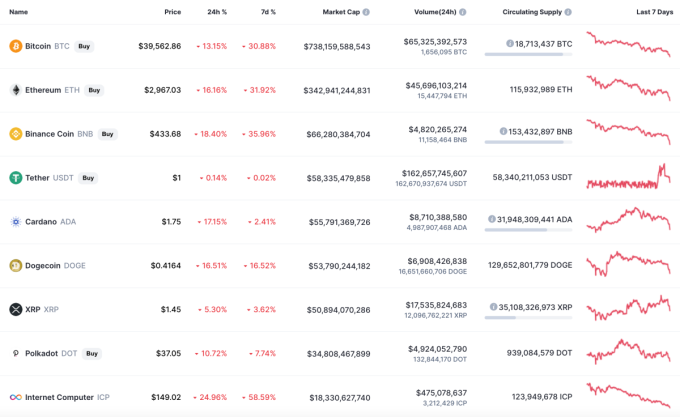 Bitcoin price began to plunge after China continued to warn about the risks of cryptocurrencies on May 18, causing the whole market to go red. Ether also fell more than 25%, to around $2,400. Dogecoin - the coin that was very popular recently dropped about 30%, down to 0.33 USD.

The capitalization of nearly 7,400 cryptocurrencies tracked by CoinGecko has evaporated nearly 500 billion USD in today's trading session (May 19). Currently, the total value of the virtual currency market is just over $1.6 trillion. The sell-off dominated the market on a day when stocks also plunged and the US Federal Reserve (Fed) was set to release the minutes of its latest meeting.

“This will be the first crypto day for many new entrants,” said FRNT Financial CEO and co-founder Stephane Ouellette.

Over the past week, Bitcoin has continuously breached important milestones when receiving negative news from Elon Musk. On May 12, Musk announced that Tesla stopped accepting payments in Bitcoin, bringing the coin to less than $50,000. He then went on to say that Bitcoin is not eco-friendly, then alluded to Tesla selling the coin.

As such, the Bitcoin price has dropped by nearly 38% in the past 7 days. Compared to the record high of more than 64,000 USD in early April, the price of this coin has decreased by more than 50%.

Yesterday, China warned that speculative trading of cryptocurrencies has returned, threatening the safety of people's assets and disrupting economic order. The country's central bank (PBOC) also reiterated that digital currencies should not and should not be used in the market because they are not actual money. The PBOC prohibits financial institutions and payment institutions from pricing products or services in cryptocurrencies.