The coin that was born as a joke has increased in value 13,000% since the beginning of this year and shows no signs of stopping.

Dogecoin is a coin inspired by the Doge meme - a picture of a shiba dog with a bewildered face, created by computer engineer Billy Markus and Adobe marketing expert Jackson Palmer to criticize the Bitcoin craze in 2013. This coin is based on Litecoin , has a very fast mining speed compared to other digital currencies and is not limited like Bitcoin. 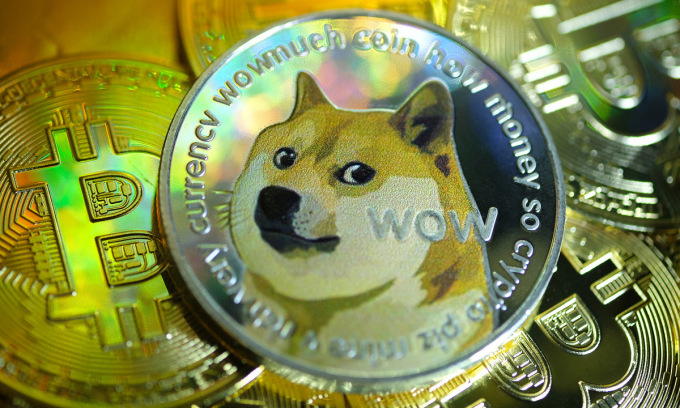 The fever of investors caused Dogecoin to peak at $0.73 per coin in early May, up 13,000% from the beginning of the year and making it the world's fourth-largest virtual currency with a market capitalization close to $70 billion.

How do users mine Dogecoin?

Virtual currencies on the "mining" temple like Bitcoin, Ether and Dogecoin all revolve around solving complex mathematical equations. The person who solves the equation will be rewarded with virtual currency.

Dogecoin uses Scrypt algorithm to mine, consumes less energy and gives faster speed than Bitcoin's SHA-256 algorithm. The difficulty of the Dogecoin mining algorithm is less than a millionth of that of Bitcoin, making the coin generation speed also much faster. To date, nearly 130 billion Dogecoins have been created, compared to more than 18 million Bitcoins.

Why has the price of Dogecoin skyrocketed since the beginning of the year?

Dogecoin received attention thanks to a series of tweets by Tesla CEO Elon Musk , starting with the line "It is inevitable" posted on Twitter by him in July 2020. The majority of investors joined Dogecoin earlier this year after it made headlines on Reddit.

How to buy and sell Dogecoin?

Investors can buy and sell Dogecoin at any exchange that allows the use of cryptocurrencies. It can be stored on the exchange or the user's personal wallet.

A series of virtual currencies with dog symbols are appearing on the market after the Dogecoin craze, notably the Shiba Inu coin, also known as the "Dogecoin destroyer".

It was created in August 2020 by an anonymous person named Ryoshi, currently worth 0.000016 USD per Shiba Inu. Each person can hold billions to trillions of the approximately 400,000 billion Dogecoins created as of May 16.